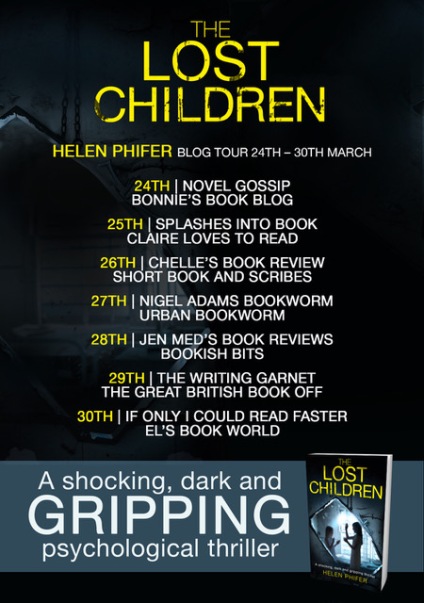 I do love it when I discover a new author and really enjoy the book, and it is even better when the book is the first in a new series. I am already looking forward to book two!

The Lost Children follows Lucy, a detective who has just returned to work following an enforced absence after an event that we never quite get to understand but that continues to haunt Lucy. On her first day back at work Lucy is thrown in the deep end when a body is found in an old and abandoned asylum, someone has been brutally murdered in a small town where this sort of thing rarely happens. When another body is found Lucy is convinced that the two deaths are linked, but why is someone suddenly killing people and how is the old asylum linked to the murdered people?

The asylum in the story is almost like a character in itself, now derelict it holds the secrets of the horrors in its past. Before being closed down for good it was home to children who were seen as difficult and unruly, or who had learning difficulties. We learn about the treatment of those children through the eyes of one of the children kept there. This added to the storyline and helped the reader to understand why these killings might be taking place.

I really enjoyed this book, it was easy to read and sucked me in. I liked Lucy as a character and her relationship with her police partner, Mattie. The book reminded me of MJ Arlidge and his Helen Grace books, which is a huge compliment.

The believable characters who are solid and well-written, combined with an intriguing and original storyline make The Lost Children a great read and Helen Phifer an author to watch out for. I look forward to the next book in the Detective Lucy Harwin series and hope to find the time to read Phifer’s previous books.

The Lost Children by Helen Phifer

🇺🇸 http://amzn.to/2m6VFOH
Lizzy pulled the covers over her head. Then she realised what was being dragged behind the person with the torch. She rammed her fist into her mouth to stop herself from screaming…For decades, The Moore Asylum was home to the forgotten children of Brooklyn Bay. But ever since a scandal forced its closure, the abandoned building has cast an imposing shadow. Until now – when an elderly man is found dead, his body strapped to a gurney… Detective Lucy Harwin, still reeling from a previous case that ended in the devastating murder of a mother and her child, finds herself on the trail of a killer ruthlessly fixated on avenging wrongs. What disturbing secrets lie within the asylum’s walls? Together with her partner Detective Mattie Jackson, Lucy begins to unearth its terrible history, and the horrors endured by the vulnerable children.As the attacks escalate and a woman is murdered on her own doorstep, Lucy is forced into a terrifying game of cat and mouse with a twisted individual. But can Lucy stop a murderer with nothing left to lose? An absolutely terrifying and gripping thriller that will chill readers of MJ Arlidge, Angela Marsons and Rachel Abbott to the bone.