I’m delighted to be on the blog tour for The Other Twin by LV Hay today! I’ve known Lucy through social media for a while now and I’ve always liked her posts and her blog where she gives some great tips for would be writers, she also did a great guest post for me on The 1 Simple Habit Guaranteed to Lower your TBR Pile.

I was very excited to read The Other Twin, not only is it written by Lucy, but it is published by Orenda Books who have an amazing track record of giving us really great books, and the book had something to do with twins which, as a mother or twins, makes me want to read any book!

When Poppy gets a phone call from her Mum telling her that her sister, India, has jumped to her death from a bridge Poppy heads straight home to Brighton. It quickly becomes clear that it is many years since Poppy last went home and saw her family.

Poppy refuses to believe that India had committed suicide. Despite not having seen or speaking to her sister in five years Poppy was sure that it was not something that she would have done. With her parents grieving Poppy sets about finding out more about her sister and what had actually happened on that fateful night.

The author cleverly weaves the story, keeping the reader guessing and trying to work out what might have happened to India. Social media is cleverly woven into the story, playing a big part in Poppy’s research. I thought that this was cleverly done, and felt very current and relevant given how many young adults are using it in their daily lives.

The diversity of the characters in The Other Twin also helps to make the story current and interesting, with scenes taking place in LGBT bars in Brighton, and questions about India’s sexuality arising.

Reading The Other Twin you would not think that this is the first full length novel that the author has written. The writing is so confident and solid, with the storyline woven so cleverly to reveal what had really happened to India, and who was actually involved.

This book will appeal to many, and I am sure that it will make you think. LV Hay is an author to watch.

When India falls to her death from a bridge over a railway, her sister Poppy returns home to Brighton for the first time in years. Unconvinced by official explanations, Poppy begins her own investigation into India’s death. But the deeper she digs, the closer she comes to uncovering deeply buried secrets. Could Matthew Temple, the boyfriend she abandoned, be involved? And what of his powerful and wealthy parents, and his twin sister, Ana? Enter the mysterious and ethereal Jenny: the girl Poppy discovers after hacking into India’s laptop. What is exactly is she hiding, and what did India find out about her? Taking the reader on a breathless ride through the winding lanes of Brighton, into its vibrant party scene and inside the homes of its well-heeled families, The Other Twin is a startling and up-to-the-minute thriller about the social-media world, where resentments and accusations are played out online, where identities are made and remade, and where there is no such thing as truth. 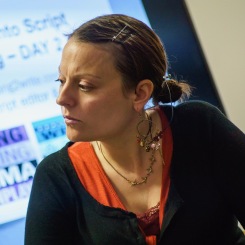 Lucy V Hay is a novelist, script editor and blogger who helps writers via her Bang2write consultancy. She is associate producer of Brit Thrillers Deviation (2012) and Assassin (2015), both starring Danny Dyer. Lucky is also head reader for the London Screenwriter’s Festival and has written two non-fiction books, Writing & Selling Thriller Screenplays, plus its follow-up Drama Screenplays. She lives in Devon with her husband, three children, six cats and five African Land Snails.

The Other Twin by LV Hay is out now and available from Amazon UK and Amazon US.