Ok, so first off I need to tell you that I really, really enjoyed reading The Secret Mother by Shalini Boland. It wasn’t that it was the best written book or the most amazing storyline but there was something about it that grabbed me and kept me hooked.

I think what made it so good was wondering whether Tessa was actually a reliable witness, was there really a child in her kitchen or was she delusional? And if there was a child then had she really taken it from where he belonged? It is perfectly set up to make the reader unsure of what the truth might actually be as Tessa’s story does sound rather implausible, why would a strange boy be in her kitchen and saying that she was his Mummy? Very clever. Something fishy had to be going on, and sure enough, it was.

The book takes us on a journey with Tessa as she sets out to prove her innocence. Her ex fights her at every turn, seemingly convinced that Tessa is unstable and needs help. But Tessa’s boss believes her and sees something in her that other’s done and he helps her find the truth. I actually really enjoyed reading about Tessa’s relationship with her boss and it was great that she had someone supporting her along the way.

I’ve not given anything away that isn’t in the blurb and so I won’t say anymore as I don’t want to ruin it for anyone, but I really did enjoy this book and thoroughly recommend it to anyone who enjoys books that keep you wondering and guessing and not sure of who to believe. Once again the publishers Bookouture have produced a psychological thriller that is a cracking read. 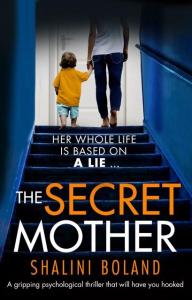 Tessa Markham comes home to find a little boy in her kitchen. He thinks she’s his mother. But Tessa doesn’t have any children.

She doesn’t know who the child is or how he got there.

After contacting the police, Tessa comes under suspicion for snatching the boy. She must fight to prove her innocence. But how can she convince everyone she’s not guilty when even those closest to her are questioning the truth? And when Tessa doesn’t even trust herself…

A chilling, unputdownable thriller with a dark twist that will take your breath away and make you wonder if you can ever trust anyone again. Perfect for fans of Gone Girl, Girl on the Train and The Sister.

Shalini Boland lives in Dorset, England with her husband, two children and their cheeky terrier cross. Before kids, she was signed to Universal Music Publishing as a singer/songwriter, but now she spends her days writing psychological thrillers (in between school runs and hanging out endless baskets of laundry).Shalini’s debut psychological thriller THE GIRL FROM THE SEA reached No 1 in the US Audible charts and No 7 in the UK Kindle charts. Her second thriller THE BEST FRIEND reached no 2 in the US Audible charts and No 10 in the Amazon UK Kindle charts. It also achieved number 1 in all its categories and was a Kindle All Star title for several months in a row. Shalini’s recent release THE MILLIONAIRE’S WIFE reached No 9 in the Kindle UK charts.Be the first to hear about her new releases here: http://eepurl.com/b4vb45Shalini is also the author of two bestselling Young Adult series as well as an atmospheric WWII novel with a time-travel twist.http://www.facebook.com/ShaliniBolandAuthorhttp://www.shaliniboland.co.ukhttps://twitter.com/ShaliniBoland

The Secret Mother by Shalini Boland is out now and available from Amazon UK and Amazon US.