Today it’s my stop on the blog tour for Stalker by Lisa Stone. I really liked the sound of this book but couldn’t fit in a review so I’m really excited to have an extract from the book to whet our appetites.

‘Yes, of course,’ Derek snapped, coming down from the ladder. ‘It’s only a small snag. Fetch me the first-aid kit from the van, will you?’

‘Not a lot of point in putting it back, was there? Cutting yourself twice in one morning and you always being so safety conscious.’

Derek let the comment go, as he was increasingly having to do with Paul. He knew he wasn’t himself today; he had bigger, more worrying issues on his mind than Paul’s bad attitude. The incident at U-Beat nightclub kept replaying through his head just as he’d seen it but he needed to try to concentrate before he had any more accidents or let something slip.

Cupping his finger in the palm of his hand to stop the blood dripping onto the floor, he crossed to the small sink in the corner of the room and held it under the cold tap. The room was at the rear of the newsagents and used for storing stock. Cardboard boxes and crates containing bags of sweets, packets of cigarettes, crisps, fizzy drinks and so on were stacked all around him.

He was trying to fit a camera in this room to complement the one in the shop, and then put their system online. Originally Mr and Mrs Osman, the owners of the newsagent, had just wanted one camera in the shop to stop thieving from the displays and for their own protection, but on Sunday evening while the shop had been closed it had been broken into from the rear and stock stolen. They’d phoned him on Monday morning, desperate, and asked if he could fit the extra camera and put the system online. It was a relatively small job but the work wasn’t progressing as quickly as it should. He was struggling to concentrate, there was only limited space to move around, and Mr and Mrs Osman kept interrupting him – coming in for stock or to ask him questions when all he needed was to be left in peace to finish the job.

Paul eventually returned, carrying the first-aid box, with his phone still in his hand; taking advantage of him, Derek thought.

Derek turned off the cold water tap as Paul set the first-aid box on the work surface beside the sink and took out a plaster. Away from the cold water the cut immediately opened and started bleeding again. ‘It’s deeper than I thought,’ Derek said, holding it over the sink.

‘Is there a bigger plaster in here?’ Paul asked, rummaging in the first-aid box.

He found a larger plaster and a sterile pad. ‘Give us your finger then, and we’ll use this to stop the bleeding.’

Derek held out his hand and Paul steadied it as he pressed the sterile pad on the wound. Gentler than he would have imagined, Derek felt the cool tips of Paul’s fingers, the touch of his clammy palm, and the warmth of his body nearby. He was standing close, far too close. Soothed and excited, Derek breathed in the bittersweet seductive mustiness of the teenage boy, a heady mixture of testosterone, perspiration and deodorant. How long since he’d been this close to a young man? He knew exactly, and knew he mustn’t go there again.

He took a step back. Paul removed the sterile pad from the wound and then expertly peeled the plaster from its packet and pressed it gently into place. 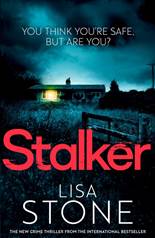 Someone is always watching…

Derek Flint is a loner. He lives with his mother and spends his evenings watching his clients on the CCTV cameras he has installed inside their homes. He likes their companionship – even if it’s through a screen.

When a series of crimes hits Derek’s neighbourhood, DC Beth Mayes begins to suspect he’s involved. How does he know so much about the victims’ lives? Why won’t he let anyone into his office? And what is his mother hiding in that strange, lonely house?

As the crimes become more violent, Beth must race against the clock to find out who is behind the attacks. Will she uncover the truth in time? And is Derek more dangerous than even she has guessed?

Just a little bit about me. I live in England and have three children. I have always been a writer – from when I was at school, with poems and articles in the school magazine. In my teens I began writing short stories, a few radio plays and novels. I finally made it into the bestseller charts with Damaged in 2007 which I wrote under the pseudonym Cathy Glass. Since then I have had 30 books published, many of which have become international bestsellers.

Thank you for your time, I hope you enjoy the Lisa Stone thrillers.

Stalker by Lisa Stone is out now and available from Amazon UK and Amazon US.

Follow If only I could read faster on WordPress.com
Join 2,091 other subscribers