One Little Lie is told to us by a number of characters, quite a few characters, with different chapters told by different characters. I like this method of storytelling but sometimes it makes the book a bit disjointed and confusing.

I’m not great with names and so sometimes I struggle when there are too many character names as I can’t remember who they all are and so it takes the first part of each chapter to remind me who is talking and what they’re doing.

One Little Lie has many narrators, I would say too many but each of them play an important part to the story and I couldn’t imagine any of them being left out. Some have more to say than others, but all are part of the puzzle.

I have to admit that I have never really given much thought to what the parents of a murderer must feel, I’ve fleetingly thought of it, especially when there have been mass school shootings in America, but it isn’t something that I tend to dwell on. But this book made me think about it.

I know when there are murders many people say that we should talk about the victim and not the murderer, and I definitely agree with that, but how would it feel to be the victims mother, your son murdered in a brutal and painful way, but all the focus is on the boy who did it and his parents? Your son seems to be forgotten but then that mother wants to make amends for what her son did and asks for forgiveness.

One Little Lie is a twisty read, what you think is happening might not be what is really happening, and are people who they seem? I think that the story is a clever one, there’s lots to like and the pace is fast with short chapters, but something was missing with it, somehow it all didn’t quite fit. I enjoyed reading, I wanted to finish it so that I could find out how it was all going to end and that is a sure sign of a decent read. But this book was so very nearly brilliant, and it’s a shame that it didn’t quite get there. But it so nearly did.

Thank you to Avon Books for a copy of One Little Lie by Sam Carrington. I was under no obligation to review the book and all thoughts are my own. 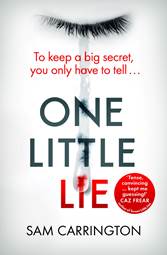 ‘My name is Alice. And my son is a murderer.’

Deborah’s son was killed four years ago. Alice’s son is in prison for committing that crime.

Deborah would give anything to have her boy back, and Alice would do anything to right her son’s wrongs.

Driven by guilt and the need for redemption, Alice has started a support group for parents with troubled children. But as the network begins to grow, she soon finds out just how easy it is for one little lie to spiral out of control…

They call it mother’s intuition, but can you ever really know your own child?

A twisty and unnerving story about the price of motherhood and the unthinkable things we do to protect our children. Perfect for fans of Cara Hunter and Laura Marshall.

‘Sam Carrington has done it again. One Little Lie is a twisty, gripping read that deserves to fly. I loved it.’ Cass Green, bestselling author of In a Cottage In a Wood

Sam Carrington lives in Devon with her husband and three children. She worked for the NHS for 15 years, during which time she qualified as a nurse. Following the completion of a Psychology degree she went to work for the prison service as an Offending Behaviour Programme Facilitator. Her experiences within this field inspired her writing. She left the service to spend time with her family and to follow her dream of being a novelist. SAVING SOPHIE was her debut psychological thriller novel and became a #1 ebook bestseller, her second, BAD SISTER is out now. ONE LITTLE LIE follows in July 2018 (ebook) September (paperback).

One Little Lie by Sam Carrington is out now and available from Amazon UK and Amazon US.

Follow If only I could read faster on WordPress.com
Join 2,093 other followers